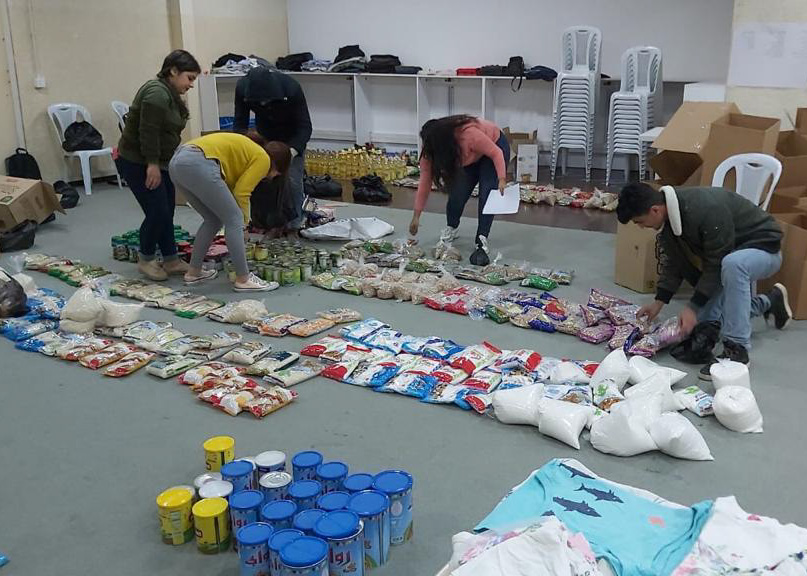 Read the article in Arabic

Nearly two Months after the protests started on the 17th of October, not a single politician has come up with a real initiative to help the Lebanese people overcome their daily struggle to provide their families with the basic needs. On the other hand, we have seen during these 2 months hundreds of ideas and initiatives launched by Lebanese Individuals and Small groups, in Lebanon and abroad, who have gone above and beyond to show real support for their country, each in his own unique and creative way.

One of these initiatives was born within the Lebanese community in our beloved Australia, and specifically in Brisbane, the Capital of the Sunshine State, Queensland where a group of 12 people are trying ta make a difference. As their mission is only to help and not to promote themselves, the group agreed to provide us only with their first names: Melhem, Elie, Nabil, Elias, Mohammad, Michael, Jad, Rana, Tony, Bassel, George and Sam.

Like Most of Lebanese here, Sam A.k. came to Australia 20 years ago looking for a better life and future. He was only 20 years old when he arrived to Sydney where he lived for 10 years, and then he moved to Brisbane where he settled for the last 10 years.
Sam lost hope of a better Lebanon 15 years ago when the assassination of over 18 Free Significant Lebanese Personalities (Politicians, Civil Activists, Journalists..) took place. He realised that more than 4 decades of Sectarianism, killing, corruption, injustice, inequality and useless wars are not easy to pass in order to build a civilised advanced free non-sectarian Lebanon…

It wasn’t until the 17th of October 2019 that this hope was born again. This day marked a Watershed for a large numbers of migrant Lebanese including Sam: “ seeing all people from all parts of Lebanon and all religions holding hands together brought overwhelming happiness and sense of proudness to me…To me that’s greater than anything I’ve seen in my life, greater than the Great Wall of China or the Pyramids …. This scene alone should have made all politicians bend on their knees, listen and take action to people’s requests for better life, and pay back the stolen money”.

From the first week, Sam started searching how he can help logistically and financially. He got in touch with prominent activists in Martyr’s Square who put him through to different people/tents…
After days of research and a lot of consultations, he decides to use the suggested Application “TOTERS” which is an online delivery tool. Sam did couple of test orders with a limited amount of money ($300-400) for some of the groups who are trying to help the revolutionaries like “Muwatin Lebnen” (they do cleaning and recycling after demonstrations) & “ Matbakh LBalad” (Free food tent in Martyr Square);

The process is divided to 3 main steps:
1-Liaise with the group to know what’s needed and how you can help, get a phone number, exact delivery address and window time to ensure volunteers are there to receive and check everything.
2-Shop and pay via Toters (enter address, delivery date/time and volunteer contact number…)
3-Send a copy of the order to the volunteers and give them the driver’s phone number.

After he has mastered the process, Sam reached out to his Brisbane friends and other Lebanese living in Brisbane whom he hasn’t met before: “I told them what I am doing and they agreed to join. We donated to “Matbakh L Thawwra in Tripoli” and after building close relationship with them they introduced us to an organisation that have volunteers from Jabal Mohsen and Tebeneh, they organise food portions (rice, oil, mou3alabet,…) and deliver to both areas. The same organisation also has a large kitchen where women from both areas also cook together and feed their families and other poor families. These 2 areas were fighting for many years and most of them are now united for one cause”.

And since Shopping on Toters is mostly through medium to large shops (mini market to Spinneys), the last donation made by the Brisbane group to the same organisation in Tripoli was in Cash via Western Union, the volunteers shopped at various small Dekeneh in the poor areas to support them and their families (not to mention cheaper products..), the whole process was monitored via videos, photos and list of items bought from each shop with shop owner name and phone number….

With time, the group became smarter and more strategic on how to help with most possible impact. The last donation to Matbakh L Balad was via a catering company: “We heard that a catering company is helping feeding the Thouwwar (revolutionaries) and people in Martyr square and Saida. I got in touch with them and we managed to do Rice Meat Chicken dish for 400 people for just LL780,000 or LL1,950 per person (less than AU$2).

Sam tells LebAustralian.com about their small group: “We’ve created a WhatsApp group to communicate more efficiently and we are now 11 people. We all used to follow our different political parties but decided to be United for Lebanon and Only Lebanon. We come from various part of the country: Batroun, Bchareh, Baakline, Beirut, Zahle, Ebadiyeh, Gharifeh, Saida & Doueir. We try to help on weekly basis. We are 100% supportive to the Thawwra (Revolution) and what it represents. It’s the closest we’ve EVER been to a Free Independent Non-Corrupted Lebanon… There is no going back from here, it’s our one way ticket to the ideal strong Lebanon – Economically, Military, Environmentally and Culturally.”

After being reluctant on opening the group up to more people, the Brisbane guys are now happy to take on more helpers: “not everyone in the group can pay $50-100 weekly which puts a lot of pressure on the other members. Having 20-25 people in one group is ideal for consistent and long term donations”.
​
Finally, Sam encourage other Lebanese in Australia to create similar groups to support “our brothers and sisters who are fighting for our beloved home country… every dollar counts, especially in this tough economic situation”.